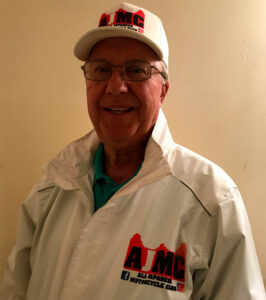 I grew up in a little town called Springfield, Oregon. My paper route was very important in my life because it gave me the chance to earn money while going to school. After wearing out 3 bicycles and turning 15, it was time to get my first motorcycle. That is when a 1966 Honda S90, silver and black entered my world and it made the perfect paper route bike in addition to my primary source of transportation. As time went on the S90 was not meeting my needs as girls had come along and a 57 Chevy filled those needs.

Fast forwarding through the next phase in life, along came the Navy, where I spent 4 years touring the Western Pacific. Even made 2 trips to Vietnam, where we chauffeured a group of Marines in and out of the country. Upon leaving the Navy , I decided that California was where I wanted to settle and I did. Got married and raised two wonderful kids, one now a pilot and the other a teacher.

The collector bug hit me around 2005. That is when I purchased my first Vintage Japanese motorcycle, because! Following that another one came along and now, well I have a few, have restored a few and sold a few.

In 2010, I became the Chairman of the Motorcycle Selection for the Dana Point Concours d’Elegance. During the five years in that position, some of the finest motorcycles on planet earth showed up to be judged against very stiff competition. 2010 marked the first year for motorcycles in this show and 27 bikes were on display for all to see. However, in 2014, the last year of the Concours show, 60 motorcycles showed up and bedazzled the crowd of onlookers. From there I continued my quest to purchase and restore motorcycles to the standard set by the factory that produced the Vintage Japanese bike.

Also in 2010, my interest was piqued regarding the International Motorcycle Show (IMS) in Long Beach. I took charge of the Vintage Japanese booth at the show and have been doing so year after year. Each year, a dozen of the finest Vintage Japanese bikes are carefully arranged at the show to not only delight passersby, but remind them of the day when “they had one of those.”

During this time I was associated with another vintage group and thought there should be one that focuses on Southern California. It was around June, 2018 my good friend Bob and I started thinking, then we hatched an idea, then we named the idea, All Japanese Motorcycle Club. And so it goes, artwork was created and now the website is being developed.

Now, the future lies before us.